We’ve had over ten years of austerity and it’s leaving our class in an increasingly precarious state. A brutal benefits regime is pushing more people into desperate poverty, homelessness, a greater likelihood of premature death and towards suicide. Even at the surface level, it’s impossible to escape the neglect and physical decay that’s blighting more and more of our neighbourhoods. As housing tenure becomes ever more precarious, the sense of community solidarity that could play a role in pulling people back from the brink is fracturing and dying.

So long as the authorities can keep the lid on the situation in the neighbourhoods where austerity has hit the hardest, they’ve no problem with the fracturing of community solidarity. The truth is, they actively pursue the project of undermining our solidarity by dividing us into the ‘hard-working and deserving’ and the ‘work shy, feckless and undeserving’. When you challenge this by showing the number of in work households who are in receipt of benefits, they’ll imply that the working poor need to be striving harder. All of this is exacerbated by the other games of divide and rule as the so called ‘indigenous’ working class is pitted against allegedly ‘job stealing’ migrants. Further exacerbation comes with the denigration of anyone who steps out of the bounds of an increasingly resurgent traditional ‘conventionality’ and tries to live some kind of alternative lifestyle.

It only takes a loss of employment and income to propel someone from being ‘hard-working’ to being ‘idle’, ‘a burden’ and on benefits. Also, unless someone is in the top quarter of the social pecking order, not only are they at risk of immiseration in an increasingly precarious world, regardless of who they, crumbling public services and infrastructure will be impacting on their lives. In terms of what we have to put up with, there’s more that should be uniting us than dividing us. Despite what the powers that be who want us divided and at each others throats may wish for, the blunt truth is that a lot of us are in this together.

Start at the grassroots

So, how can we start to re-build the sense of solidarity we need to fight back against this and eventually, build the better world that we deserve? Start small and start right at the grassroots where you live. A simple act of solidarity is looking out for the neighbours on either side of you and for them to do the same. Even if it’s a house of multiple occupation, quite often, it’s possible to strike up a rapport. We’ve seen this happen with a member of the Vange Hill Community Group reaching out to and forming a working relationship with EU migrants in a house of multiple occupation in their close.

In order to get people to know each other a bit better, canvass opinion and organise a practical activity such as a community clean up. Not only will you see a physical difference after a few hours graft, for a lot of people, doing something collectively with their neighbours will be an empowering experience. Even if it’s just a close or a small street, it’s a start and if people on other parts of the estate see what’s been achieved, hopefully they’ll be inspired to do the same. 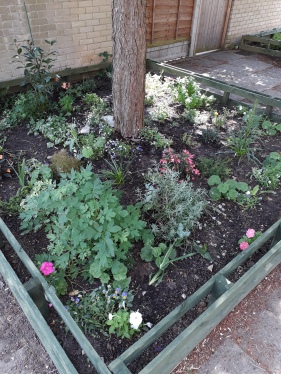 One step up from a clean up is starting a community garden if you can find a suitable location. That can be anything from putting in a few flower beds to brighten up an otherwise dreary close to starting to grow your own vegetables and fruit – or doing both if you feel ambitious enough and can get enough people involved. As to whether you want to ask the council for permission first, it’s entirely down to you. If your council has a record of being uncooperative when dealing with tenants and residents on your estate, just go ahead and do it anyway. Given how stretched councils are, providing you’re sensible, they’ll most likely leave you alone. If they do decide to get stroppy, mounting a campaign to save your garden will bring people together and should you win, will give morale in your part of the estate a significant boost.

Organising regular cleaning, doing whatever maintenance you feel you can take on and running a community garden will bring people together. Also, picking up the skills needed to this this acts as a boost to people’s confidence and self esteem. Not everyone will be able to make an equal contribution because of time pressure or disability – accept that any contribution is valid and ensure support from those who can’t take part is valued. Once a level of cohesion has been built up, work out ways of making sure that vulnerable people in your community are being checked up and their needs are being met.

On isolated estates, food poverty can be an issue due to the lack of shops selling decent quality, affordable food and poor public transport to shopping areas where a wider range of food is available. As well as running a community vegetable and fruit garden, you could start to think about an estate run food bank or food buying group. Obviously, this takes more effort and there’s a learning curve involved but if you put the effort in, you’ve achieved a vital objective – getting more control over your food supply.

Use what’s there to help boost community solidarity and morale and also to ensure the needs of the more vulnerable people in your neighbourhood are being met. As anarchists, we’re supposed to reject the church. Well, when a church such as Trinity Methodist Church in Vange has a community cafe for use by the whole neighbourhood, contribute to food banks, offer support to disabled people, run toddler groups, offer youth activities to all young people in the community to name just a few, it would be churlish in the extreme to not accept the help and support they can offer. Essentially, a lot of what they do is not dissimilar to what some more grounded, neighbourhood anarchist groups abroad who’ve got their act together undertake!

We are where we are so the priority has to be re-building community solidarity in whatever ways that work. On top of this, empowering people who want to make life in their neighbourhoods better is an essential task. As we’ve seen from what’s happened with the community run Hardie Park in Stanford-le-Hope, the transformation in the lives of those involved plus the boost to morale in the town proves the worth of sticking at this. Small victories can steadily lead to a growing sense of confidence and collective strength that will give people a growing degree of independence from local and national governance that’s increasingly failing them.

None of this is going to be plain sailing and one of the more difficult parts will be dealing with the anti-social element in a neighbourhood. In an ideal world, those chaotic households where there’s a risk of members falling into anti-social behaviour or crime would be getting helped by the surrounding community. We want to get to the point where that can happen and there’s less need for outside intervention. In the interim, once a degree of community solidarity starts to emerge, the people best placed to decide how to deal with anti-social behaviour are those living in the neighbourhood. They’ll have the knowledge of the perpetrators and a shrewd idea of the risks involved – that will go a long way to enable them to devise a strategy to deal with the situation.

We keep returning to this theme in various forms. We make no apology for this because if we can’t build and nurture a sense of community and solidarity, any other change is pretty much off the agenda. A lot of what has been written above comes from our days in the Independent Working Class Association and then our more recent experiences working with Basildon & Southend Housing Action, Brooke House Residents, Vange Hill Community Group and Friends of Hardie Park.

We don’t pretend to know it all because we don’t and are honest enough to admit that what we do is a constant learning curve. We recognise that some of the more purist anarchists may find that our approach has too many ‘compromises’. The point is not to just theorise and understand the world but to change it. We’re doing what we can with limited resources working with our class at the grassroots, getting our hands dirty (literally sometimes!) to try and make a difference. We hope people can respect that and offer solidarity when we need it…