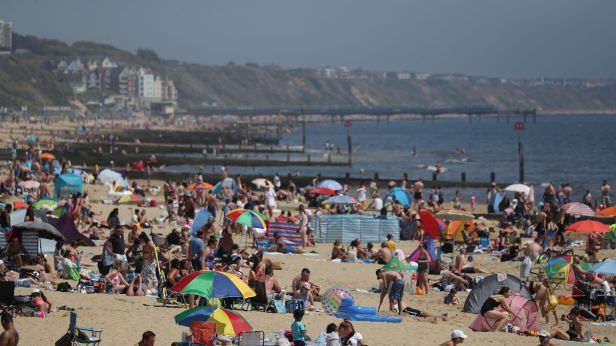 Last week on the beach at Bournemouth

By Dave (the editor)

The lockdown that was implemented in a bid to control the spread of the COVID-19 virus is starting to be eased slowly and patchily. Unless you live in Leicester where as a result of more testing being undertaken, more people have been found to have COVID-19 – they’ve been told by the government they’ll have to wait another two weeks before restrictions can be eased. So, where the heck are we as we head to what many politicians and commentators are branding as the ‘new normal’?

To be honest, that’s almost an impossible question to answer but we’ll have a go at getting a few of our thoughts down. Despite a few restrictions being eased, the messaging about physical distancing and wearing masks on public transport continues unabated. Let’s just say that the debate about compliance/non compliance with the guidelines on masking is a pretty heated one to say the least!

Immediately after Monday 15 June when it became ‘mandatory’ to wear some kind of face covering on public transport, from my observations, compliance was around the 80% mark. Last week on Thursday 25 and Friday 26 June when the weather was extremely hot, compliance appeared to have dropped down to just over 50%. From my own personal experience, wearing a mask in the summer heat is uncomfortable and my guess is that many people, seeing that the platform/train wasn’t crowded and there wasn’t anyone employed to enforce compliance, simply chose to pull off their face covering so they could breathe freely.

From what can be made out, the biggest knock to physical distancing and face covering etiquette has come from the vast numbers of people wanting to get out and enjoy themselves again. From block parties and raves on the estates and in the fields to people flocking to the parks and the beaches, last week saw what could be seen as a gesture of defiance. Obviously, it wasn’t political in any way shape or form – it was people seeking some kind of relief after months of being cooped up with seemingly no clear end point in sight. It was hedonistic and yes, it did get a bit messy (metaphorically and literally) and confrontational at times.

Those who have swallowed the rhetoric about physical distancing and face covering etiquette obviously vented their spleen at the gatherings last week. As for the government, you can sense some degree of frustration at the cops for not going in heavy handed to disperse the crowds. Although from what we can gather, for those involved in block parties on the estates, their experience of the police was a fair bit more close quarters and aggressive than that of the sun bathers on the beach at Brighton.

The authorities probably heaved a massive sigh of relief over the last weekend when a drop in temperature and an unseasonable degree of wind kept people indoors and away from any large, potentially rowdy gatherings. Some people are getting worried about some pubs re-opening on 4 July fearing drunkenness and disorder. Having looked at the measures pubs are obliged to implement and the sheer hassle involved in getting a drink, somehow we suspect that they will not exactly be overwhelmed with punters wanting to get smashed.

When the weather starts to get better again, people will be back out on the estates, in the parks and heading to the beaches. The government want the cops to take a harder line all round. The cops are saying they want to avoid getting into confrontations that could spin out of their control, claiming they want ‘policing by consent’. So, we have a bit of a stand off between a government that would like to appear to be in control and law enforcement that looks like it may well not be up to the task of ensuring this.

The next few weeks could prove to be pretty volatile and as a result, ‘interesting’. No government wants to ‘lose control of the streets’. Hundreds of thousands of people sunbathing and partying on the beaches, in the parks and on the estates in contravention of months of messaging about physical distancing and face covering could well be viewed by the government as defiance. If the cops are unwilling to ‘control’ this, then the government risks looking impotent.

The question is, how far would the government be willing to go in order to regain ‘control’ of the streets, parks and beaches? There are other questions… Who would be willing to support an apolitical, hedonistic, raw and messy defiance of government diktat? On the other hand, who would support a crackdown on this hedonism, regardless of how brutal it could get, just to ensure that the physical distancing protocol and face covering etiquette continues to be observed?

A block party in Harlesden