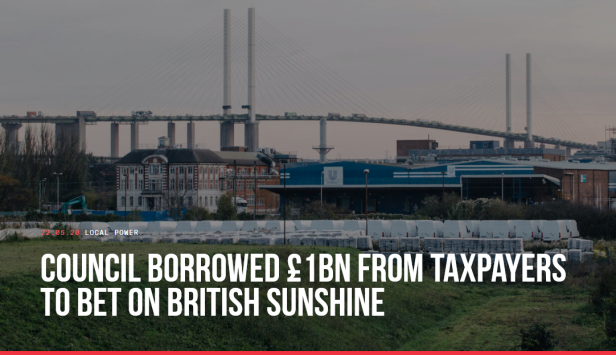 We’ve published more posts than we care to remember on the theme of who actually runs Thurrock Council – the elected councillors or the senior officers? This is one of the more recent ones we’ve posted: The battle over who actually runs Thurrock Council – 17.01.20. Like a fair few people operating at the grassroots in our communities, we’ve long suspected that senior council officers have way too much power and are not subjected to the scrutiny they need to be under.

There have been a few rumours and stories speculating on the extent of Thurrock Council’s borrowing. Cynical and battle hardened as we are, even we were taken aback at the scale of the borrowing when this investigative report was published: Council borrowed £1bn from taxpayers to bet on British sunshine – 22.05.20. Take time to read this report thoroughly, trust us, it’s worth the effort.

Thurrock Council’s borrowing was mainly from other authorities. It wasn’t for the funding of vital services, it was for investment in solar farms and the like – none of which are anywhere near Thurrock. The stated aim is to find an investment that will generate enough revenue to make up for the cut in funding to local authorities by central government. This is a stark example of the commercialisation of local government, forced to find more ‘innovative’ ways of funding in the face of over a decade of austerity.

This is how the story (so far) is being covered by some of the local media: Is Thurrock Council’s finance king a genius – or is council on the precipice of disaster? Major investigation into secretive borrowing that exceeds £1 billion and is set to double – 22.05.20 then: Councillor defends financial strategy: “It is a cliché – but we said we would fix the roof whilst it is shining; and we did” – 22.05.20 and finally(for the moment): Call for special full council meeting to discuss implications of £1 billion borrowing – and how it came to happen in secret! – 23.05.20.

For us, there are two things that stand out. Firstly, how the f**k was the council’s Director of Finance, Sean Clark, allowed to borrow and invest so much with so little accountability to elected councillors, let alone the public of Thurrock? Secondly, why are a number of the Tory ruling group councillors not only defending what Clark has done but also the lack of openness and transparency around this level of borrowing and investment? Whatever happens, that money has to be paid back and if the investment fails, Thurrock Council and all of us residents who rely on the services they provide will be absolutely f**ked.

We’ve said it before and we’ll say it again. The system of local government we have is broken and not fit for purpose. It’s something that’s done to us by arrogant f**kers who think they know better than us mere mortals and who refuse to be held to any degree of accountability. In an ideal world, councillors and council officers would be the servants of the residents who elected them and would be fully open and accountable to us. Well, as is abundantly clear, we live in a far from ideal world!

Will this report from the Bureau of Investigative Journalism be the straw that broke the camel’s back? We’d like to think so but there are factors that will get in the way of this.

The first is the cancellation of the local elections that were due to take place earlier this month – a consequence of the response to the COVID-19 crisis. We can’t even elect councillors who may have the courage to start putting senior officers under proper scrutiny for almost another year FFS!

The second is the unnerving willingness of too many people to trust what the authorities are doing and not question their strategy, tactics or motives. You only have to look at the reaction of the public to the measures ostensibly brought in to deal with the COVID-19 crisis and the still relatively small size of the anti-lockdown movement to see this. Despite the efforts of the likes of Neil Speight of Thurrock Nub News, it’s quite conceivable that Thurrock Council could just spin their way out of this one, getting people to accept their ‘we know best narrative’.

Needless to say, we’ll do what we can to get people to start asking the questions that need to be asked and reject the bullshit the council think they can fob us off with. As this issue develops, we will be commenting on it and doing what we can to stir people to some kind of action. 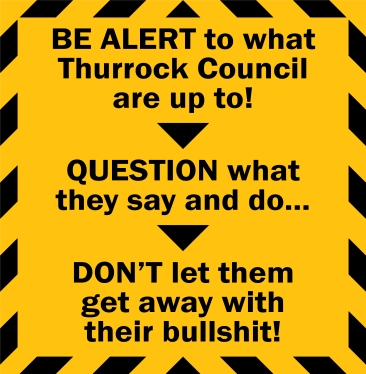