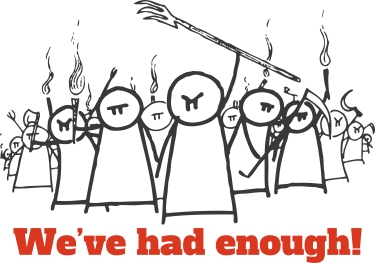 Dave A (the editor)

There are some supposedly radical / anarchist commentators who seem to be able to manage the feat of ascribing racist motives to concerns expressed by working class people about the way their neighbourhoods and communities are changing as a result of the impersonal forces of late capitalism. To these commentators, ‘legitimate concerns’ are seen as a byword for thinly disguised racism. What I want to do in this piece is challenge the notion that expressing concerns about rapid change is ‘racist’ while acknowledging that the far right will exploit legitimate concerns for their own nefarious purposes. A caveat – I’ve written this from my perspective as a community activist which is where I’ve had the bulk of my political experience. This does inform what follows…

I live in Thurrock and in conjunction with a number of other people, operate politically across the south of Essex. Since I started door-knocking for the Independent Working Class Association way back in 2004 all the way through to publishing this blog and the Heckler paper, I’ve seen a lot of changes happening across the region, particularly in Thurrock. Changes which many people living in the area feel have been forced upon them without any hint of consultation. I’ll run through some of these changes, highlighting why people are rightly concerned about them. You can then draw your own conclusions…

Let’s start with social cleansing from London as part of the project of making the capital a welcome home for the global super rich. All the inner and many suburban London local authorities are complicit in this process, regardless of whether they are controlled by Labour, the Tories or some kind of coalition. This is one of the many pieces we’ve written over the years about this: What happens with housing in London has an impact all the way along the estuary (and beyond).

When London boroughs clear estates for ‘re-development’ and seek to re-house their (former) tenants, it will often be outside the borough and in many cases, outside the capital. All too often, the alternative ‘accommodation’ offered will be in a private rental property. Local authorities across Essex who haven’t built any social housing for decades, even after manipulating their waiting lists downwards, are obliged to try and house people in private rental properties. A bidding war between the Essex local authorities and the London boroughs ensues in an effort to secure the services of a local landlord. Unsurprisingly, the London boroughs with their pockets flush with money from the developers invariably win.

As well as this, London based housing associations acting as proxies for the boroughs they’re based in will buy up properties on estates in our region in order to move tenants out here. We know that the Newham based Local Space housing association have been buying up properties on estates in Basildon. A local community activist on the Vange Hill estate pointed out one such property to us when we were over there facilitating a community clean up. So, when a house that’s been sitting empty for a number of months is suddenly occupied by a household from Newham, it’s not surprising that some people in the area will see this as ‘queue jumping’. This is when we have to spring into action, trying to explain to hard pressed, pissed off locals the reason for this and get them to re-direct their anger at the London boroughs responsible for this social cleansing. Which is why, in conjunction with Basildon & Southend Housing Action, we produced the leaflet shown below and distributed it across a number of estates in a bid to explain to locals what the dynamics of the situation were. 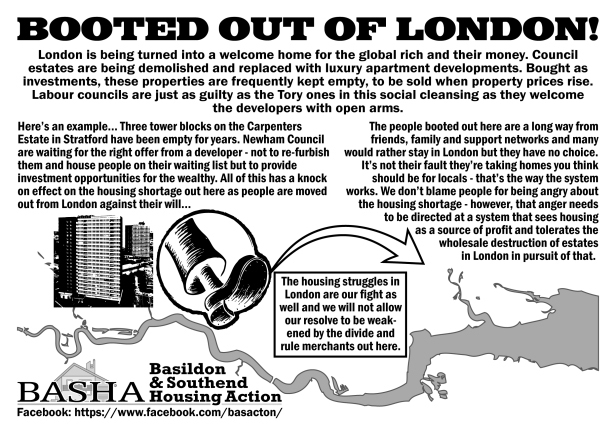 New house building targets are another bone of contention. From the now abandoned Thames Gateway initiative through to the somewhat opaque discussion about making land available to developers, our region is seen as having to accommodate a lot of new housing, much of which is for people commuting back into London. This is because all of those shiny apartment blocks springing up across London are either investment vehicles or are simply too expensive even for many middle class people to rent or buy. Hence, even those we’d consider to be on pretty good money have little option but to move out of the capital if they’re going to get a halfway decent home.

The revelation that Grays is one of the most affordable commuter towns around London – Most affordable commuter towns for five UK cities revealed – is pretty much the starting pistol for setting off a wave of applications from developers to build thousands upon thousands of homes for commuters. Which, if you’re on the waiting list for council housing in any local authority across the south of Essex, is going to do you no good at all.

Across the region we cover, the number of new homes that the government demands local authorities find space for goes into six figures. Obviously this raises concerns ranging from how an already squeezed hospital and healthcare system is going to cope, through to questions about how an already stretched road and public transport network will cope with tens of thousands of extra journeys through to objections about the loss of green space. All legitimate questions to ask about the consequences of a planning process that apart from a few token ‘consultations’, us mere mortals have no say in. Planning is something the majority of people feel is done to their communities rather than anything they have a stake in.

As you can imagine, there have been elements of the far right who have jumped on some of these concerns, twisting them around to suit their divisive agenda. With the few resources we’ve had, namely this blog, the Heckler paper and the handful of comrades we have, we’ve had to work hard to de-bunk the spin the far right put on these concerns, explaining what’s happening to London with a manipulated, skewed housing market and getting people to direct their anger at the right targets.

A little diversion here. People have always moved out of London. It’s how the capital acquired its suburbs and how the surrounding region saw commuter towns starting to grow. People will always be moving out of London because understandably, they have reached the point where the pace of life in the capital is too much and they want to live somewhere marginally less frenetic. There are some people out here, who themselves moved out a few decades ago, making disparaging remarks about the ‘Londoners’ moving out now simply because many of those moving out are BAME. People making these comments aren’t expressing legitimate concerns, they’re racist, simple as that!

Back to meeting government imposed housing targets. Too many local authorities seem to think that the pressure of meeting these targets means it’s open season on any patch of open land, pocket woodland or even a chunk of a local park. Here’s a piece we wrote about Thurrock Council’s lamentable attitude towards preserving these kind of spaces: The urgency of preserving woodland habitats – Thurrock Council fail to get it!

Regardless of size or location, public open spaces exists for a variety of reasons, one being the boosting health and well-being: UK parks deliver £34bn of health benefits, suggests report. In a civilised society, public open space would be valued for the benefits it brings to surrounding communities, not regarded as an asset to be flogged off willy-nilly to developers. With local authorities increasingly regarding them as financial assets and disregarding the negative impacts of the loss of open spaces, the values that constitute a civilised society are being disregarded.

This isn’t NIMBYism. Ever denser housing and the consequent loss/lack of open space has a detrimental impact on mental health and leads to rising levels of stress. With the way things are going in the world, life is already way too stressful! On the other hand, resident run open spaces have a positive impact on mental and physical health, not to mention community spirit: Staying grounded… This is about the kind of society we want to live in. A choice between one that values the intangible, non-monetary benefits of public open spaces for health, well-being and community spirit or an increasingly dystopian hell hole that puts a monetary value on everything it can and trashes everything else. So yes, concerns about the loss of public and informal open space are legitimate…

There are many more example I could cite and may well do in future pieces. It’s time to start drawing a few conclusions from what’s been written. From over fifteen years of operating in grassroots activism, one over-riding impression I get is that people do not like rapid change when they feel they have absolutely no control over the direction of that change. Over the last fifteen years, this dislike of rapid change has been exacerbated by the further atomisation of society and an increasing decline in trust in government at all levels, the media, the education system – the list goes on…

People want to be in control of their lives and also, how their communities develop and grow. Obviously in a late capitalist society that’s becoming increasingly dysfunctional, far from having any degree of control over our lives, we’re buffeted around by forces beyond our control. Expressing concerns about the way rapid change is impacting our lives is not reactionary – it’s an understandably human response to the situation we find ourselves in. When you have a situation of rapid change that many people feel has an adverse impact on their lives while not understanding the dynamics of that change, in a society where levels of trust are in decline, it’s not surprising that reactionary ideas can take hold in some sections of the working class if there’s no discernable positive alternatives on offer.

Across Thurrock and Basildon, there are literally a handful of us doing what we can to explain the dynamics of rapid change and what needs to be done to bring control right down to the grassroots while at the same time, doing our level best to counter the reactionary shite some elements in our area come out with. The only back up we get is from a number of very sound people further to the east in Southend, a handful of trusted comrades in London and a few other trustworthy comrades scattered around the country in Bristol and up in Durham.

When working class people express their fears about the way rapid, uncontrollable change is screwing their lives over, rather than putting quotes around ‘legitimate concerns’ and dismissing them as reactionary racists, all we ask is that the radical and anarchist commentators who do this actually make an effort to understand us. Because, out here in Essex, the working class is far from being exclusively white and is in fact, pretty diverse. Sure there are some tensions among our class out here which is inevitable living in a dysfunctional, high pressure situation. The thing that unites all of us is the desire for a decent life where we’re in control of all aspects of our lives from the work we do through to the way our communities develop and grow.

It’s that desire for a better life that we try to use as the entry point for our politics. It’s not an easy task and one that’s made harder when legitimate concerns are dismissed or we’re divided on the basis of whether we’re ‘white working class’ or BAME by a number of point scoring radicals and anarchists who can’t be bothered to understand what life is like for us. Do us a favour, lay off doing that and actually give us some backing:) 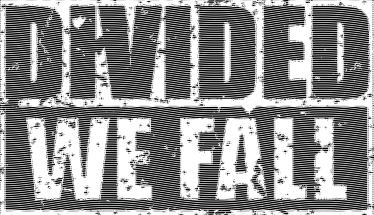 4 thoughts on “‘Legitimate concerns?’ Yes, they are legitimate!”