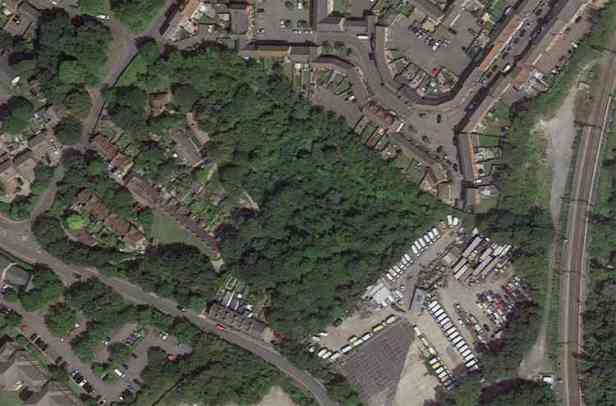 The site at Hollows Wood, Purfleet, as it is now

What it will look like if the developers get their way

Thurrock Council have been talking for a number of years about the comprehensive ‘re-generation’ of Purfleet. They’ve now finally announced their intention to get on with it: Council gives notice of its intent to buy Hollow Woods land for Purfleet new homes project.

So where in Purfleet do Thurrock Council make a start on this project? Not on any of the many acres of brownfield land in and around Purfleet that are lined up for eventual development. No, they make a start on a surviving patch of chalk woodland with plans to level pretty much every tree on the site, leaving just a token bit of virtually treeless open space.

It would seem that Thurrock Council are gaining some form for facilitating the trashing of woodland habitats. Not too far away at Badgers Dene (near Grays town centre), Thurrock Council have allowed a development of eight homes on land adjacent to Curling Lane, Helleborine and Meesons Lane: Officers dismiss objections by residents, councillors and campaigners and recommend approval for new Grays housing development. Residents and local wildlife campaigners objected to the scheme on grounds which included: Additional traffic / Loss of wildlife and green space / Loss of amenity. None of that mattered to the council who swept aside the objections and allowed the development to proceed.

Forests across the globe have been burning at an unprecedented rate. The focus is now on the bush fires in Australia. An almost incomprehensible amount of tree cover has been lost. It’s not just that trees, woods and forests act as carbon sinks, they also provide a habitat for flora and fauna. We’re in an age not only of climate change but also of species loss with bio-diversity in precipitous decline.

It’s like Thurrock Council are living on a different planet where they can just drive on with a policy of relentless growth with no regard to the adverse consequences this will bring. It seems as though they’re oblivious to the crash in bio-diversity that will damage the eco-system we all ultimately rely upon. Not only that, they don’t seem to grasp the importance of small pockets of unspoilt natural/semi-natural open spaces in our communities for people’s physical and mental health.

They need an urgent reality check to bring them to their senses so they get the message that habitat destruction in the name of ‘growth’ is simply not acceptable. Folks, it’s over to you how to pursue this…