Design a site like this with WordPress.com
Get started
Skip to content
Date: November 26, 2019Author: the_stirrer 0 Comments 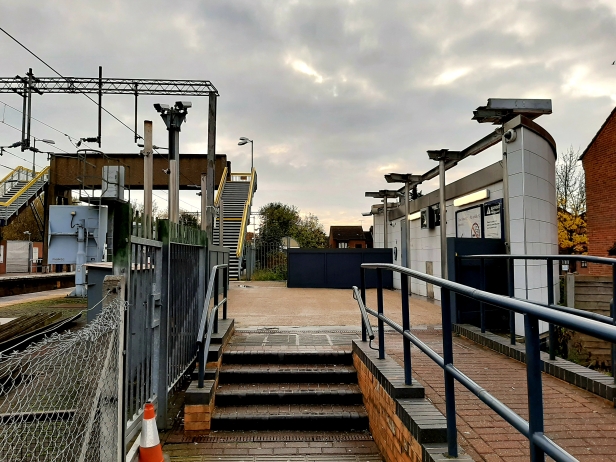 We’ve already aired some of our views on the botched re-development of the railway station at Stanford-le-Hope. Very briefly, this is the story so far…

The station is supposed to be undergoing a comprehensive re-development with the whole project being overseen by Thurrock Council. The aim being to provide a better rail/bus interchange and enhanced public transport connections with the growing London Gateway super-port.

Demolition of much of the infrastructure took place last February with re-construction supposed to be well underway by now. The project is stalled because Thurrock Council a) underestimated how much it would cost and b) need to acquire more land to progress it.

‘Temporary’ facilities are now being constructed to keep the station functioning at a basic level – no one has a clue as to when (or even if) work on the full re-development will resume. The ‘temporary’ facilities include a ticket office located on the other side of a busy main road from the main part of the station. Seriously, you couldn’t make this up!

These are the posts we’ve already published about this issue:

Are you feckin’ serious?!
A descent into total farce…
Thurrock council…another communication breakdown

Thurrock Council is run by the Tory group of councillors, albeit they cannot command an overall majority. The two councillors for the Stanford West ward which includes Stanford-le-Hope railway station are Terry Piccolo and Shane Hebb, both Tories. We’ve heard nothing from either of them in the way of an explanation as to why the development has been stalled let alone an apology. One that’s owed to the c2c and security staff struggling on in conditions that are a joke as well as all of the passengers who use the station.

Granted, there is an issue with the officers involved in the botched redevelopment being less than forthcoming. Cllr. Mark Coxshall who is the lead for regeneration has described the council’s management of the project as a ‘bit of a mess’ and has had trouble finding out what his officers’ plans are for the station.

With campaigning for the general election now in full swing, councillors and council officers alike will try to hide behind the excuse that they’re in purdah until December 13th. We don’t accept that as an excuse but realise that we won’t get anything out of the council until this sodding election is over.

From December 13th onwards, there’s no excuse. Piccolo, Hebb and Coxshall and the council officers responsible for this farce owe the passengers using the station and the staff working there a full explanation of what’s gone wrong, what’s being done to get the project back on track and above all, a full apology. Basically, they need to start openly and honestly communicating with the people they’re supposed to be serving.

If they cannot bring themselves to do this, then they need to take a serious look at themselves and consider doing something else with their lives because the situation is totally unacceptable. It’s no surprise that turnouts at local elections in Thurrock are around the 30% mark. When people see elected councillors and council officers treating them with contempt, they’ll rightly turn their backs on the sham that’s local ‘democracy’.