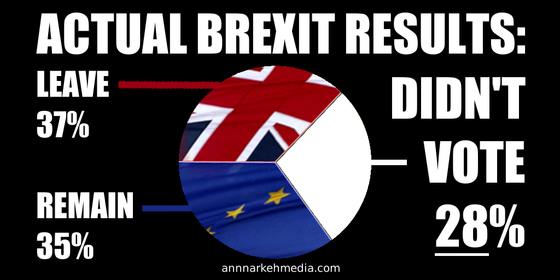 Quite simply, when you factor in the 28% of the electorate who, for whatever reason, decided to not participate in the 2016 referendum on the UK’s membership of the EU, it puts the ongoing shitshow into perspective. The vote for Leave was only 37% of the total electorate when you factor in those who didn’t vote. Had the results in a close contest been reversed, it would have been Remain ‘winning’ with just 37%. Either way, 37% out of the whole electorate doesn’t really give the result any serious legitimacy.

A lot of people have said that the 28% who chose not to vote should have voted on the basis it would have given the result more legitimacy. They also say that those who didn’t vote have no right to any say in the ongoing row about how, or even if, Brexit can be delivered. We say bollocks to that!

We’ve read and heard a heck of a lot about the feelings and views of both Leave and Remain voters. We’ve heard a lot less about the 28% who didn’t vote in the referendum. Possibly that’s down to a dumbed down media that likes things simplified to two sided confrontations and can’t handle any nuance or complexity.

We’ve said this before and we’ll say it again – let’s hear it for the 28% who looked at what was on offer, the way both sides conducted themselves during the referendum campaign, concluded the exercise was bullshit and abstained. That may be for a variety of reasons ranging from thinking both sides relied on hyperbole rather than facts through to not wanting to legitimise a referendum that would cause serious divisions. As far as we’re concerned, the 28% who didn’t vote took a legitimate, principled position that deserves recognition.